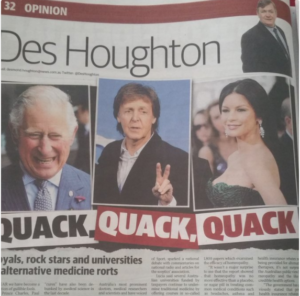 Royals, rock stars and universities in alternative medicine rorts: “Friends of Science in Medicine, a reputable group exposing quackery, warned recently about the rise of irrational and unscientific practices with roots in “occult forces and magic powers” from the 1700s.”

Homeopathic products should not be sold in pharmacies – review: Items place consumers at ‘unacceptable risk’, independent examination of regulation for the health department finds.

Pharmacies face ban on selling homeopathic products: FSM remains “concerned that consumers may be misled about the value of complementary medicines in the absence of appropriate evidence-based advice at the point of sale.”

The report recommended that pharmacies be forced to separate complementary medicines from Schedule 2 and 3 medications on the sales floor.

Read our latest newsletter with updates on what Friends of Science in Medicine (FSM) have been up to. FSM works hard to make complaints about those who are making misleading claims. At the end of our newsletter, Prof. Edzard Ernst comments on the ethical obligations of pharmacists:

“Alternative medicine differs from conventional medicine in numerous ways. One important difference is that patients often opt to try this or that product without consulting any healthcare professional at all. In such cases, the pharmacist might be the ONLY professional who can advise the patient who is about to purchase such a product.

This is why the role of the pharmacist in alternative medicine is crucial, arguably more so than in conventional medicine. And this is why I am banging on about pharmacists who far too often behave like shop-keepers and not like ethical healthcare professionals. A new review addresses these issues and provides relevant information.”

“One point that is not directly covered here is the duty of pharmacists to comply with their own ethical codes. As I have pointed out ad nauseam, this would mean in many instances to not sell alternative medicine products at all, because there is no good evidence to show that they are generating more good than harm and thus are potentially harmful as well as wasteful.

All this has been going on now for well over a decade. And has there been any noticeable change? Not as far as I can see!
Perhaps it is time to realise that not merely the sale of bogus medicines by pharmacists is unethical, but so is dragging one’s feet in initiating improvements.”

Stop those naturopaths who spread anti-vaxxer myths: “We examined more than 300 websites for naturopaths and naturopathic clinics in Alberta and British Columbia. In this study, which was recently published in the Journal of Law and the Biosciences, we identified 53 websites that had vaccination-hesitant language and/or suggested a vaccination alternative.

In other words, a significant number of naturopaths – that is, members of a provincially regulated health profession – are explicitly and publicly spreading nonsense about vaccination. And this ignoble list doesn’t include the clinics (and there are many) that make baseless claims about how to naturally “boost” your immune system.”

The Doctor Who Saved Countless Newborn Babies: Have you heard of Virginia Apgar? You might not have heard her first name before but most parents will instantly recognise the surname. During her medical training in the 1930s, because she was a woman, she was steered away from a career as a surgeon into anaesthesiology. Not content with merely anaesthetising patients, she began to study mortality in newborn babies. From her observations, she devised a tool to identify babies that required extra care post-birth: the Apgar score. This score consisting of five charactersitics (appearance, pulse, grimace, activity and respiration) is scored at one minute and five minutes after birth. Babies scoring low and not improving require medical intervention. With the Apgar score, Virginia changed medical practice and saved the lives of countless babies. And it is still in use today.

Major advance in treating rare cancer Now we can target cancer in new and creative ways!

I want to talk a little about antibodies, which are close to my research and close to my heart. They are proteins made by your immune system to fight ‘pathogens’ (ie. bacteria, viruses) and they do this by recognising a small unique part of the pathogen (like someone may recognise you by your unique hairstyle!), and sticking to it.

Cancer is a disease where some cells in your body change and go rogue so they grow in an uncontrolled manner, but because they have changed they often have different proteins which your immune system can recognise as being ‘foreign’. Antibodies made against these mutated parts can target cancer but not healthy tissue.

The drug mentioned this article is an artificial antibody which recognises a protein that is covering the lymphoma cancer cells. We have lots of anti-cancer antibodies approved for use and binding an antibody to the cancer means the cancer cell is tagged for destruction by the immune system. But this drug called Brentuximab vedotin (antibody drugs usually end in ‘-ab’) is an ‘antibody drug conjugate’ with an anti-cancer drug attached (vedotin).

Now this is where it gets cool.

Immunotherapies like this one mark a new age of cancer treatment. With continued development in this field, we can hope to one day render cancer a disease that you ‘die with’ rather than ‘die of’.

Kyly Clarke on why she won’t let her daughter play with sick kids: Meningococcal is a dreadful disease because 5-to-10 per cent die.

The simple patch which may replace painful flu vaccinations forever: Vaccines delivered via a painless, throw-away patch could one day eliminate the need for needle-and-syringe flu injections, researchers have revealed after completing a preliminary trial.

“Anti-aging” Drinking the blood of slain gladiators, guinea pig injections, bathing in soured milk and partial vasectomies: The lengths humans have gone to throughout history in search of eternal youth: It is very easy to look back and sneer or mock the many misguided anti-aging and rejuvenation fads that have been tried through history. However if you look at what is being marketed today, you realise not much changes. People still want the same things, and there is always someone with a new idea to ‘hack’ aging and sell the idea of youth. The fact that the ‘alternative’ treatments of today continue to follow the patterns of yester-year tells us much about the thinking of the promoters, and about the plausibility of treatments offered.

Unless we use valid scientific evidence as our filter, modern society can be just as misguided as the punters who rushed dead gladiators to drink the virile blood.

Circulation Theory –William Harvey: It is amazing how much we have learned in a relatively short period of time. Whilst Harvey was able to discover through experiment the basics of the circulatory system less than 400 years ago, a similar proposal only 63 years earlier led to Dr Michael Servedo being burned at the stake.

“Obesity is a different story. Well-documented increases in overweight and obesity will likely be a driver of liver cancer through the pathways of diabetes and non-alcoholic fatty liver disease, a condition where fat accumulates in liver cells.

But the major engine driving increased liver cancer is likely to be the rising prevalence of people infected with hepatitis B and hepatitis C viruses. Chronic hepatitis causes infection and inflammation of the liver, which can lead to scarring called cirrhosis. In some, this leads to cancer.

Around 450,000 Australians live with either hepatitis B or hepatitis C. The two viruses are passed on in quite different ways. More than 90% of people with hepatitis B virus were born overseas in countries where the virus is common, such as the Asia Pacific or sub-Saharan Africa.

Meanwhile, injecting drug users dominate the 227,000 people with chronic hepatitis C virus in Australia, making up 57% of those affected.”