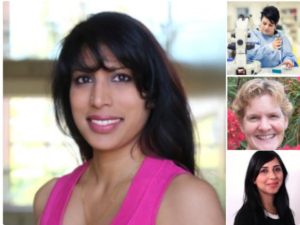 Four superstars of STEM at Uni of Adelaide: FSM congratulates the Stars of STEM, including our very own Dr Pallave Dasari (main picture)!

Are ‘needle-like’ nanoparticles found in Australian infant formula dangerous? This is another in the long line of health scares by people pushing agendas.

“There are no significant public health implications for the finding small crystals of naturally occurring calcium phosphates in milk-based products. The use of all that analytical chemical firepower might serve to over-awe the non-expert reader. Anyone who understands them and can assess the numbers will just ask ‘so what?’. The clue that the investigators are pushing an agenda is in their repeated use of the phrase ‘needle like’ to describe the crystals of hydroxyapatite. It’s a ‘dog whistle’ for ‘you will be feeding your babies sharp objects if you use these products’. The truth is that these particles are the natural form of hydroxyapatite and they dissolve easily in the acids of the digestive system.”

‘What Used to Be Fraud Is Now Alternative Medicine’: Interesting interview with Dr Steven Novella, writer for Science-Based Medicine and host of The Skeptics’ Guide to the Universe podcast:

“People tend to cherry pick. They tend to choose which science they want to believe. They don’t necessarily reject all of science just because there’s one piece of it, but I do think that the public has been deliberately confused about what is the consensus of scientific opinion and what qualifies as good science.

There have been deliberate campaigns of doubt and confusion as we say, right? I mean the classic example is, of course, the tobacco industry that did a very good job of sowing doubt and confusion about the health risks of smoking, and that model has just metastasized and now we see it with regard to all sorts of things.

Interesting within medicine, I think the most interesting phenomenon has been the re-branding of what 50 years ago was universally known as health fraud to an alternative to medicine. This is now … what used to be fraud is now alternative. And in order to make that sale, they, in a large way, turned science on its head. They said, “No, we’re going to use science differently. We’re going to use different standards of evidence. We’re going to use pragmatic studies as if they were efficacy trials, etc. We’re going to ignore prior plausibility or scientific plausibility and it’s all good. We’re going to have this ‘western medicine’ dichotomy that doesn’t really exist and pretend like some things can’t be studied, except in the ways we want them to be studied because those are the ones that give the results that we like.”

So, it’s been an amazing deliberate campaign to confuse how we know stuff in medicine in order to allow in this really low standard of evidence because these are treatments that don’t do well when you hold them to rigorous standards.”

Insulin: The Canadian discovery that has saved millions of lives: This is the story of the insulin as a treatment for type 1 diabetes.

Diabetes is caused by damage to the pancreatic islet cells, the source of insulin. In 1922, Dr. Frederick Banting and Dr. Charles Best injected an extract of pancreas into a boy dying from diabetes. He recovered and was healthy as long as he got a daily injection of the extract. The extract contained insulin, the substance necessary for proper glucose uptake by cells. Today, people use glucose monitors and insulin injection or insulin pumps to manage their blood sugar. Their lives are more of less normal but they still need to be supplied with insulin and will for the rest of their lives. But the wave of the future for type 1 diabetics is pancreatic islet transplant: replacing the damaged islet cells to remove the need for injected insulin. This treatment, though effective, still has drawbacks and researchers are working to make it better so diabetics can be freed from blood tests and injections forever.

Azithromycin is an antibiotic (bacteria-killing) drug that also has anti-inflammatory properties. In a world-first, scientists at the Hunter Medical Research Institute have tested Azithromycin in asthma patients – and found a 40% reduction in asthma attacks. More studies are required to fully understand how best to use this treatment, but it represents a promising step in the effort to manage asthma.

I’m HIV-positive. But thanks to drugs, no one can catch the virus from me: “Now I know I’m healthy and can’t pass on the virus, I’m enjoying every moment life brings… I’m not a risk and there is no need to treat me any differently. We need to get this message out to the people who aren’t getting tested, who are living with undiagnosed and untreated HIV, simply because they’re too afraid to know. Currently one in seven people living with HIV in the EU doesn’t know they have it, and can therefore still pass on the virus. If we removed the fear, we could stop HIV transmission.”

People with HIV can now live long and healthy lives, with little risk of passing on the virus. However, this is only with appropriate management and therapy – it is important that the fear of a HIV diagnosis does not prevent people being diagnosed or seeking treatment.

The Placebo Effect Is No Excuse To Buy Junk: We all swear by something that we know probably doesn’t work. Maybe it’s vitamin C when everyone at work has a cold, or #bootea while we diet, or compression socks while we run. “Even if it doesn’t work, what’s the harm?” we tell ourselves. The truth is, it’s not harmless, and we’re only fooling ourselves.

“Pragmatic Studies” : Emergency acupuncture: This study was a “non-inferiority” study, where the author attempt to show that therapies are “equivalent” rather than to demonstrate superiority to placebo. Also known as a pragmatic study. As we have pointed out before, a pragmatic study is only valid when testing a modality that has “already have been demonstrated to work in randomized clinical trials.” A pragmatic study can show unexpected interactions, but it can’t demonstrate positively that something actually works. The same rules apply here and acupuncture has not been demonstrated to be credibly better that placebo.

In this case “Neither the patients nor the practitioners were blinded to experimental group. Those who assessed pain scores were blinded, and so were the statisticians who carried out the analysis. Thus, the potential for placebo effects was maximized.” Despite this “The acupuncture only group received significantly more rescue medication therapy than the groups that received pharmacotherapy … Oral opiate medication was offered as first line rescue medication to patients in the acupuncture group and parenteral opiates to the two pharmacotherapy groups.” A yet the authors still conclude that that acupuncture needs to be investigated an explored for use by emergency staff.

Flu season in New South Wales tracked to be worst on record: This year’s flu season is pretty bad! “Certain groups in the community like pregnant women and people with underlying health problems are eligible for a free flu vaccine each year but everyone else is recommended to get it and they can get it from their GP or their pharmacy.” The flu vaccine produces a relatively short-lived immune response of about 6-12 months after vaccination so people need to update their flu shot every year.”

Health Check: what can your doctor tell from your urine?: Doctors request a urine test to help diagnose and treat a range of conditions including kidney disorders, liver problems, diabetes and infections. Testing urine is also used to screen people for illicit drug use and to test if a woman is pregnant. Urine can be tested for particular proteins, sugars, hormones or other chemicals, certain bacteria and its acidity or alkalinity. Doctors can also tell a lot from how your urine looks and smells.