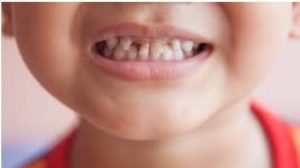 Child tooth decay is on the rise, but few are brushing their teeth enough or seeing the dentist: “Our poll shows that many parents, despite meaning well, lack the basic knowledge to prevent tooth decay in their children. Others are confused when it comes to recommendations about brushing teeth, diet and when to see the dentist for a check-up.”

We asked five experts: should I let my kids drink juice? “There are two main problems with fruit juice and teeth – first, the sugar (either from the fruit, or added) feeds bacteria in the plaque on the teeth, that make acid which causes dental decay. Nearly half of Australian six year olds have at least one hole in their teeth, and drinks like fruit juice are part of the cause. Second, the acid content of many fruit juices can dissolve the hard outer coating of the teeth (the enamel) and once it is dissolved, it can’t grow back. Research suggests nearly four in five Australian children have signs of erosion in their primary (baby) teeth, and one in four in their permanent teeth. If you decide to let your child drink juice, then having it with a meal is the healthiest for teeth, avoiding drinking between meals.”

The lowdown on the pill that’s helping prevent HIV before it starts: Pre-Exposure Prophylaxis is used effectively to lower the transmission risk of HIV by up to 92%.

Ethics: The ethics of CAM: More harm than good?: Much has been written on CAM, but this book takes a new approach. It asks if CAM is ethical, and answers with a resounding “No.”

In all areas of health care, patients are entitled to expect certain basic precepts:

The authors say, “These basic ethical requirements are frequently neglected, ignored or willfully violated in CAM.”  They address these precepts one by one, in great detail, showing how CAM fails to measure up.

Why so many people believe conspiracy theories: Conspiracy theories have been around for quite a while: the second shooter on the grassy knoll, Area 51, Elvis didn’t die, Hitler escaped to Argentina, the moon landing was faked. But they seem to be an increasing part of popular belief: 9/11 was a set-up, mind control with chemtrails, the FDA is suppressing the cure for cancer, and the ever-popular vaccines cause autism.

This article discusses what sorts of people are attracted to conspiracy theories and why. In short, conspiracies are a way for people to package reality in a way that makes sense to them. As such, these people are not malicious, they are merely playing to their built-in prejudices. Best way to handle a conspiracy theorist? Refute their views with the best evidence available. You won’t convince them, but someone else may read your arguments and be impressed with your facts as well as your professional manner in engaging with the conspiracy enthusiast. Worth a try anyway.