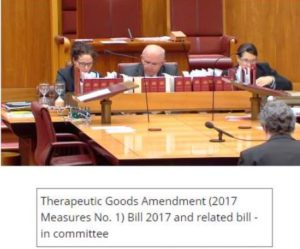 New list of permitted advertising lines for complementary medicine products does little to protect consumers: “Only 140 (out of over 1000) claims on the list require the manufacturer to have scientific evidence that backs them up. For the rest, only evidence of “traditional” use is required – that is, use for more than 75 years in an alternative medical tradition like traditional Chinese medicine, Western herbalism, Ayurveda, Unani or homoeopathy. The TGA’s own work shows regulatory breaches are on the rise when it comes to complementary medicines. In 2014-15, 73 per cent of the 212 cases investigated were found to be in breach. That jumped to 80 per cent of 473 cases investigated in 2015-16. And the most common problem was failure to produce evidence to support product claims.”

Drug regulator under fire over herbal supplement company’s claims: “The science has disproven that this herb works,” Ken Harvey, a professor of public health and preventive medicine at Monash said. “Surely it’s crazy for the administration to allow them to advertise this product with no disclaimer. But for me, this is becoming typical … It’s another example of them being very helpful to industry while being ineffective from a consumer protection point of view.”

“A TGA spokesperson said the herbal supplement was approved because [sufferers] MIGHT WISH TO TRY [emphasis added] such a product for symptomatic relief.  The approved representations can help facilitate that choice while also providing advice to the consumer on when it is time to see a health professional,” she said. “The Consumers Health Forum has urged the government to require labels on these complementary medicines to state whether or not their efficacy is medically proven. At the moment the administration’s approval process lends a false veneer of efficacy to these products in the eyes of many consumers.”

Inside chiropractic – yesteryear and today: In the 123 years since its inception, the core beliefs of the chiropractic profession have not changed. Chiropractic continues to exist as a form of alternative medicine that embraces a variety of questionable procedures and treatment methods. The chiropractic profession in the United States is still defined by the vertebral subluxation theory that gave it birth and independence as an alternative to conventional medical care. Chiropractors resist changes that would allow development of their profession as a conservative back-care specialty.

Medicare data reveal $564 million wasted on chiropractors and osteopathic manipulation: $500 million – the amount the US government spent on chiropractic cover in 2015.

Dubious aspects of osteopathy: Following on from a recent post to this page, here is a quite level-headed critique of osteopaths. Despite being taken from Quackwatch, osteopaths are not relegated to the scrap heap but are treated with respect. What the author does take exception with is the more dubious aspects of the Doctor of Osteopathy (DO) training and in particular cranio-sacral therapy. And do take the time to read some of the comments at the end of the piece. Many are from DOs and reinforce the author’s views. DOs are proud to be well-trained physicians but they don’t all subscribe to the magic inherent in some osteopathy practice.

These skeptics are using science to fight a wave of bad nutrition advice on the Internet: “A lot of the people promoting pseudoscience are pretty good at the “Gish Gallop,’ ” says Gorski. That’s when a dishonest charlatan lists many misleading items to leave their opponent flustered by heaps of pseudoscience. It looks like the dishonest speaker wins the debate because the scientist can’t possibly reply to all of the junk. The charlatan provides no references, and ignores the scientist who requests them. If you see this kind of battle, it’s a red flag that bunk is afoot. Some other warning signs that you’re getting junk science are when:

Queensland man dies after contracting diphtheria: One of the reasons that diphtheria kills so rarely in Australia is the widespread use of the vaccine. Unfortunately, is this case the patient was not vaccinated.

Low carb, Paleo or fasting – which diet is best?: “The evidence seems clear, most diets are equally effective when it comes to weight loss. The important thing is to find a diet that works for you – one you can enjoy in the long term. Perhaps we need to remember the origins of the word diet, coming from the Greek “diata”, meaning way of life. This meaning has been adapted over time to mean a restriction. It’s time we reclaim the word diet for its true meaning, and look to find ways of eating that are both enjoyable and improve health. What we have learned from countries where people live long and healthy lives is that they tend not to focus on specific diets – counting calories, fussing about carbs – instead they eat local produce that is affordable and enjoyable.”

I’m not overweight, so why do I need to eat healthy foods? “Excessive salt consumption can cause the kidneys to hold on to more water, resulting in an increase in blood pressure. High blood pressure strains the arteries that supply blood to our vital organs including our heart and brain, and increases our risk of stroke, dementia, heart attack and kidney disease. Consumption of high amounts of sugar, especially from sugar sweetened beverages, is associated with an increased risk in fatty liver disease, among many other health problems. This in turn significantly increases our risk of liver scarring, heart disease and stroke.

Recent research has also reconfirmed a link between bowel cancer and red meat consumption. Processed meats such as ham, bacon and salami appear to be especially problematic. Not only can all of these occur without any visual cues, but they can also develop irrespective of our weight.”

Organ Transplants: A Brief History: The life-saving and extraordinary process of transferring a functional organ from one person to an entirely different person is less than 80 years old and is only possible thanks to the scientific understanding of immunology. Advancements in surgery have also continued to play an important role in addition to the understanding of the phenomenon of immune rejection.

Permitted Indications for ‘traditional’ medicine. ‘Softens hardness’: TGA under fire for health claim list that critics say endorses pseudoscience: Hundreds of bizarre health claims such as “tonifies kidney essence” and “opens body orifices” will be approved by the TGA and appear on complementary medicine labels under new laws… Critics claim 86 per cent of the 1019 indications are not supported by scientific evidence, including “softens hardness”, “replenishes gate of vitality” and “moistens dryness in the triple burner.  Everybody thought things would get better, but it’s made things worse because the indications will be government-approved and government-required, and under product liability laws, if something is required by a government, it can’t be found to be a hazardous product.”