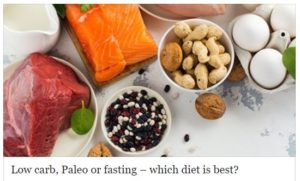 Scientific literacy low priority for CAM practitioners: “A draft industry skills forecast for the complementary health industry puts scientific literacy near the bottom of a list of ‘key generic skills – ranked in order of importance. Sciences, mathematics and scientific literacy’ ranks 11 out of 12, meaning that finance and entrepreneurship (including the ability to sell ideas and products) are more important. Only “environmental and sustainability” skills rate lower than an appreciation and knowledge of science.”

How ‘natural’ doctors can hurt you: “The problem,” Caulfield says, “is that many of their treatments aren’t evidence-based. I went to a naturopath, and it was a totally pleasant experience, but I left with $250 in homeopathic solutions and herbal supplements that are completely useless.” Homeopathy, for example, is based on the notion that tiny doses of a toxin can cure certain medical conditions. (Drinking small doses of pollen dissolved in large quantities of water to cure a pollen allergy, for example.) But a large and growing body of research has found that homeopathy doesn’t work any better than a placebo, or sugar pill. Some critics say that even less contentious parts of naturopathy tend to be steeped in pseudoscience. “No one disagrees that diet and lifestyle are important,” says Michael Munger, M.D., president of the AAFP. “But a lot of the specifics naturopathy offers are bogus.” For example, N.D.s sometimes base dietary advice on a patient’s blood type. But a 2013 review in the American Journal of Clinical Nutrition concluded that there was no scientific evidence to back that approach.”

“Integrative Medicine” Co-opting the opioid crisis to promote funding for acupuncture by Medicaid: For the peddlers of alternative medicine, the American opioid crisis is a gift from heaven. Operating under the guise of “integrative medicine”, alternative practitioners, acupuncturists in particular, have found their gold mine: a non-pharmacological alternative to pain management. They have dusted off the same old low-quality studies that “prove” acupuncture works for lower back pain and have extrapolated that into the panacea for opioid addiction. And thereby are seeking legitimacy by obtaining funding through Medicaid. Never mind there exists no evidence that inserting needles into non-existent meridians to redirect the flow of non-existent chi produces any useful effects. Who needs scientific plausibility when political expediency calls? I wonder though, as acupuncture and other useless alternative practices expand, if people will figure out the bottom line: that alternative medicine does not work.

Low carb, Paleo or fasting – which diet is best? “The evidence seems clear, most diets are equally effective when it comes to weight loss. The important thing is to find a diet that works for you – one you can enjoy in the long term. Perhaps we need to remember the origins of the word diet, coming from the Greek “diata”, meaning way of life. This meaning has been adapted over time to mean a restriction. It’s time we reclaim the word diet for its true meaning, and look to find ways of eating that are both enjoyable and improve health. What we have learned from countries where people live long and healthy lives is that they tend not to focus on specific diets – counting calories, fussing about carbs – instead they eat local produce that is affordable and enjoyable.”

The answer to asthma may be in dirty diapers: Yet another interesting and promising study investigates the human biome. In this case the researcher hope to fine predictive test for asthma, knowledge which may also help lead to treatments.

Could ageing immune systems be a better predictor of cancer than genetic mutations? I really like the explanation of cancer as a consequence of immune system failure. There are many factors that contribute to cancer, some more concrete that others (asbestos exposure, eating processed meat, genetics) and chance plays a big role. Our bodies are constantly growing new cells, and constantly making cells with little mutations – little DNA mistakes which can have all sorts of effects. If the mutations cause the cell to die, that’s it, the cell dies and surrounding healthy cells will replace it’s function. Sometimes the mistake might have no effect on the cells function or survival, and sometimes the mistake causes that cell to grow faster or survive when it otherwise would not. When more mistakes happen in the cells or their daughter cells, they can accumulate and cause huge changes in cell growth and function. These can become tumours.

Even in a healthy person, these events are occurring fairly regularly. There are even enzymes in our cells that look for mistakes and try to fix them, which can be considered the first ‘safety net’. If that doesn’t work, it’s down to the immune system to sense this ‘different’ cell and kill it before it can become a tumour (the second ‘safety net’). It’s usually very good at this, but certain mutations also make cells very good at evading the immune system. Immune deficiency (such as that associated with age) also decreases the ability of the immune system to nip these cells in the bud, and takes away the second safety net. So many cancers might be due to immune system failure, in addition to accumulating mutations, and this article explores using immune system function to determine the likelihood of tumour development. It explains the trends we see in cancer incidence – gender differences, and increased risk with age.

New Gardasil 9 vaccine boosts teens’ protection from HPV and cervical cancer by 23%: “It found the new vaccine was far more effective, targeting an extra five of the most common cancer-causing strains of HPV and potentially preventing 23% more cervical cancers. Thus infection with the new types was markedly reduced too. With a reduction in infection, there is a reduction in the diseases that the HPV can cause. The common side effects with Gardasil 9 in the clinical trial were the same as with the older Gardasil vaccine. These were pain at the injection site, local swelling in the arm at the injection site and redness. There were no differences between the serious adverse events between the two vaccines.”

Genetic testing for personalised medicine: Not all genetic tests should be publicly funded – here’s why: Genetic testing has revolutionized disease treatment for many disorders – including cancer, neurological disorders and cystic fibrosis. This new knowledge we can gain about a person’s condition may tell us if a drug treatment will work, what won’t work, or the likelihood of a re-occurrence. However, genetic screening tests in healthy people are becoming more common and there are many ethical questions that come along with it.

Would you want to know your likelihood of developing an untreatable condition? In the case of Huntington’s disease, patients with a family history may be tested to ‘rule themselves out’ or to be able to plan for eventual neurological decline. But is a life spent planning for a degenerative disease better than one lived in ignorance of the disease? Not surprisingly, many people opt against testing. Public funding of these tests would likely increase the number of people having the tests, and thus it poses ethical considerations too:

Vital signs are vital: The invention of pulse oximetry. Also known as the fifth vital sign, being able to determine someone’s blood oxygen saturation in mere seconds is a diagnostic luxury that has only been widely available since the 80’s.

Direct to consumer medical testing: MyMedLab offers expensive, useless, non-standard lab tests: What if your test shows you have glyphosate in your blood? What does that mean? It probably only means that modern laboratory analysis is capable of detecting minute levels of pretty much anything you could name; but that doesn’t mean that those levels cause any significant harm to health.