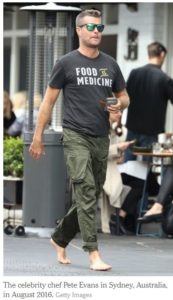 Indian doctors fight against quackery: “There is already a massive problem of medical pseudoscience in India. This bill would legitimize all of it, give it regulatory and educational power, and set back the cause of science-based medicine in India indefinitely.” With a doctor shortage, Indian policymakers are considering allowing ayurevedic, naturopathic and other ‘alternative’ practitioners to function as primary health care providers after a short bridging course (perhaps as short as 3 months).

Top ten signs your detox may be a scam: “There’s a reason we fall for the marketing of detoxification — we seem hardwired to believe we need it. Purification rituals date back to the earliest reaches of recorded history. The idea that we’re somehow poisoning ourselves and we need to atone for our sins seems to be a part of human nature. Popular ideas of detoxification and cleansing have no basis in reality. There’s no published evidence to suggest that detox treatments, kits or rituals have any effect on our body’s ability to eliminate waste products effectively. “Detox” focuses attention on irrelevant issues, giving the impression that you can undo lifestyle decisions with quick fixes. Improved health isn’t found in a box of herbs, a bottle of homeopathy, or a bag of coffee flushed into your rectum. The lifestyle implications of a poor diet, lack of exercise, smoking, lack of sleep, and alcohol or drug use cannot simply be flushed or purged away. Our kidneys and liver don’t need a detox treatment. If anyone suggests a detox or cleanse to you, remember that you’re hearing a marketing pitch for an imaginary condition.”

Completely idiotic things anti-vaccination celebrities have said over the years: There are a lot of opinions when it comes to vaccines — and this is especially true in the celebrity world. The safety of vaccines was first publicly questioned by gastroenterologist Andrew Wakefield, who went on to publish research suggesting the connection between vaccines and autism. His research has since been debunked. Many, however, still consider these life-saving immunizations unsafe. This article is about what the celebs who speak out against vaccines have to say.

Religion is no excuse for anti-vax nonsense: “It is right to withhold taxpayer funded benefits when those decisions threaten public health. Anti-vaxxers who say they are entitled to do — and receive — whatever they please, and who plead religious freedom to justify their choices, are making a mockery of the hard-won freedoms enjoyed by the rest of us.”

How to counter the Circus of Pseudoscience: “In the face of this circus, we doctors must hold tight to evidence. We must hold tight to our doubt, our knowledge of our fallibility as individuals and as a profession, knowing that humility is a strength, not a weakness. But we must also as a profession engage in the public conversations about health, including on social media, along with our colleagues in allied health fields. If we do not, the discussion will be dominated by the passionately uninformed, who build trust only to sell false cures. And we must listen to patients, as we are taught to do, showing care and understanding. We must take on the difficult challenge of inspiring and motivating with the truth”.

Why getting enough sleep should be on your list of New Year’s resolutions: “If you’re told you snore, or you never feel refreshed even after what seems to be a long sleep, talk to your GP about whether you might have an underlying disorder that makes getting enough sleep harder. According to last year’s national sleep survey, 8% of Australians have diagnosed sleep apnoea, 18% have restless leg syndrome and 20% have insomnia. Getting help for these conditions will impact your physical and mental health. While time spent sleeping may feel akin to “doing nothing” for your health, the benefits of regular, refreshing sleep for your brain and body mean that it should be on your New Year’s resolution list right next to healthy eating and exercise.”

New Years Detox: Debunking the detox: The ‘healthy’ ritual might be alluring, but it isn’t what it seems: After indulging is excess over Christmas & New Years, many people will feel the need to cut back, reducing consumption of sugar, fat, processed food and alcohol to get back towards a more more balanced diet. However this is also the time that the ‘detox’ industry sells plans to help ‘cleanse the body’. “Pricey juice cleanses are endorsed by celebrities such as Gwyneth Paltrow and Salma Hayek. Beyoncé reportedly dropped 9kg in 10 days using the Master Cleanse, shunning food for a cocktail of hot water, lemon juice, maple syrup and cayenne pepper.” Juice diets, sweat lodges, detox patches, and colonic irrigation treatments are sold for this purpose. But “Countless research studies suggest that the lack of fibre in juices significantly reduces any supposed health benefits. Drinking juice over a long period of time has even be suggested to increase the risk of metabolic syndrome, liver damage and even obesity.” Detox patches are widely debunked, sweat lodges have killed multiple people, and colonic irrigation can cause electrolyte imbalance and colon perforation.

“In January 2016, the BMJ issued a cautionary tale on detoxing after a Milton Keynes woman was hospitalised as a result of a herbal detox. And in 2008, an Oxfordshire woman was awarded £800,000 after she suffered permanent brain damage while on a hydration diet recommended by her nutritionist.” Warner says. “Saying that you need to detox implies that some of the food you are eating is toxic. That’s a pretty unhealthy way to think about it.”

The virus that conquered the world, 100 years later: “Called ‘La grippe’, ‘three-day fever’ and the ‘Spanish flu,’ the influenza pandemic of 1918–1919 ravaged communities worldwide, claiming the lives of an estimated 25 million to 50 million people. In the United States, more than 25 percent of the population was affected by the extremely virulent influenza A H1N1 virus, forcing schools, theaters and public places to close. Americans were ordered to wear masks to try to slow the spread of the disease, which often progressed rapidly — sometimes in as little as two days — to a lethal form of pneumonia. Nearly 100 years later, the threat of another influenza pandemic looms large as the scientific and global health communities find ways to prepare for, and battle, future outbreaks.”