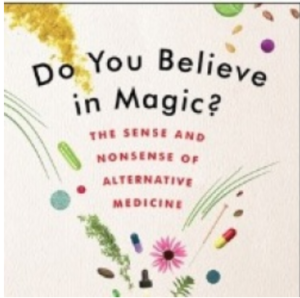 Chiropractors – all they’re cracked up to be?: FSM founder Dr Marcello Costa being interviewed about chiropractic on the “Science Vs” podcast. Dr Costa’s section starts from 19:50, but I recommend the whole podcast. It gives a good discussion on the experience of chiropractic, the history, the issues, and the evidence.

Damn the evidence and regulations: VA goes full speed ahead with medical pseudoscience: “As David Gorski has pointed out regarding integrative medicine, it is, in short, an excuse to incorporate quackery into conventional medical care. And as with quackademic medicine, conventional modalities like exercise (tai chi, yoga) and massage are somehow rebranded as ‘integrative.'”

The FDA Endorsing Acupuncture: No Way, Right? Back in May, the FDA issued a blueprint of proposed changes for physicians who manage pain. “FDA Education Blueprint for Health Care Providers Involved in the Management or Support of Patients with Pain”. OK, nothing wrong with a little extra education, right? Or maybe there is, depending on what is being taught.

China to roll back regulations for traditional medicine despite safety concerns: “From early next year, traditional Chinese medicines may no longer be required to pass safety and efficacy trials in humans in China. Draft regulations announced in October by the China Food and Drug Administration (CFDA) mean traditional medicines can skip such costly and time-consuming trials as long as manufacturers prepare ingredients using essentially the same method as in classic Chinese formulations. The State Administration of Traditional Chinese Medicine and the CFDA will compose a list of the approved methods. The Chinese government has been forcefully promoting traditional Chinese medicines (TCMs) as an alternative to expensive Western drugs. Doctors of Chinese medicine have welcomed the new policy, saying that it will make it easier for companies who produce such medicines to get drugs approved and make them available to patients. Lixing Lao, director of Hong Kong University’s School of Chinese Medicine, says that although traditional medicines will no longer need to go through clinical trials, the CFDA will still require remedies to undergo preclinical pharmacological testing and drug-toxicity studies in animals or cells to gain approval.”

“But Li Qingchen, a paediatric surgeon at the Harbin Children’s Hospital and a well-known critic of TCMs, says the recent recalls of remedies show that current safety measures aren’t adequate. He says doctors need to inform the public about some of the dangers associated with traditional medicines, but that most are unwilling to speak out against them. ‘Few doctors would dare to publicly criticize TCMs,’ he says. Li thinks that the government’s promotion of TCMs will make it harder for scientists to criticize the drugs ‘because the matter gets escalated to a political level and open discussions become restricted.'”

Health agency reveals scourge of fake drugs in developing world: “The studies estimate that roughly 10% of medicines in circulation in poorer countries — where technical capacity to enforce quality standards is often limited — are substandard or falsified. Cases aren’t limited to expensive or well-known medications, and are split about equally between generic and patented drugs. One analysis in the reports estimates that up to 169,000 children could be dying each year from pneumonia because of inferior antibiotics. Poor-quality medicines not only fail to treat or prevent disease, they also risk worsening antimicrobial resistance, says Mariângela Simão, the WHO’s assistant director-general for Access to Medicines, Vaccines and Pharmaceuticals. People taking substandard antibiotics that don’t fully treat an infection could develop resistant infections that spread. The findings underestimate the scourge of fake drugs, says Marc Gentilini, a member of the French Academy of Medicine who studies the issue. But crucially, he adds, there is not yet a plan in sight to tackle the problem.”

NHS England scraps 18 ‘low value’ treatments on prescription following consultation: GPs and Clinical Commissioning Groups will be told to remove what NHS England described as “ineffective, unsafe and low clinical value treatments” and seven products have also been referred to the Department of Health for blacklisting.

The Invention of the Petri Dish. How Julius Richard Petri’s Dishes Changed Medical History  The relatively simple (with the benefit of hindsight) idea to cover bacterial growth containers with a transparent lid to reduce contamination of the specimen has allowed incredibly important scientific discoveries to occur, including those that led to now-common practices like milk refrigeration.

Sham surgeries: A tale of medical reversals & the role of the media: It is common to hear alternative medicine advocates claim that medicine doesn’t really know anything. They tend to point to ‘times medicine changed its mind’ as proof of this. However this really highlights several things:

1) Acquiring medical knowledge is complex, difficult, and fraught with confounding factors;
2) Medicine is constantly learning;
3) There are no unchallengable dogmas in science;
4) The chances that a therapy is valid is exactly proportional to the effort that has been put into disproving it;
5) Sometimes public demand pulls a plausible therapy into use prematurely.

Medical science has to go so far, that sometimes it even has to do sham surgeries for comparison of outcomes. If it takes this level of work and error checking to get medicine right, what are the chances that alternative medicine, having done none of this work at all, will be valid and free from errors?

Rather than treating medicine with suspicion when it updates, it would be better to:

1) Trust the institutions that actually engage in self-correction;
2) Check that the therapies you are presented with are supported by science in the first place, rather then by popular media.

Medical Facts and Figures in History

The History of Measles: This is a concise history of the disease measles through the 20th century and into the 21st. Sadly, measles was considered eradicated from the United States in 2000; but it has made a comeback, most famously in the Disneyland outbreak of 2014/2015. More recently, an outbreak has also occurred in Minnesota earlier this year in the immigrant Somali community. And why is an eradicated disease returning to the community? Well, some of it is imported from overseas but in long-time residents the culprit is poor uptake of vaccination, particularly in certain areas. This was the case in Minnesota where anti-vax groups targetted Somali immigrants with mis-information about vaccines. Perhaps this time-line will make it apparent that measles decreased due to vaccinaiton and improved vaccines decreased it even further. And that non-compliance with vaccination has lead to recurrence of a disease that should no longer be a public health issue.

3D printed brain bio-implants could help manage brain disorders. Small tissue cubes made from pluripotent stem cells can form into functioning nerves – this opens the door for specialised and personalised implants that could correct neurotransmitter imbalances within the brain. Animal trials are still ongoing though, so it remains to be seen if this can be clinically translated.