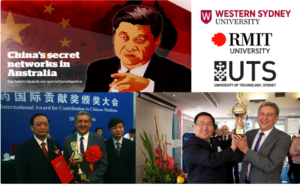 China Power and Influence! Part 1: TCM and the Aussie Academics who sold their souls! It is unfortunate that China, who has made rapid advances in science and technology, decided to stick with TCM and not on collaboration with Australia in modern evidence-based healthcare. … The $170 billion TCM industry seems to be the main motivator for both WSU and the Chinese government and NOT improved health outcomes for Australians.

University of Queensland scientist Ian Frazer on cusp of breakthrough on neck cancer vaccine:   Every week it seems that science has learned something new and improved our knowledge about disease, about health, or is finding a new treatment. This highlights the power of science to move forward and improve. When was the last time you heard of an alternative medicine studying and improving our medical knowledge?

My anti-vax mother-in-law from hell: A woman unwittingly married into a family of anti-vaxxers who not only denied her children vaccination against childhood diseases, but also refused them conventional medicine when they were sick.

Baron Larrey – Napoleonic inventor of ambulances, triage and MASH:  The Invention of the Ambulance. These speedy vehicles packed with life-saving technology originated as horse-drawn carts on the Napoleonic battle-fields.

Fat but fit? The controversy continues: Whilst there is much more to health than weight and body-fat percentage, it should also not be surprising that the metabolic and inflammatory reactions that are caused by excess body fat raise risks for a number of diseases. Physical activity and other healthy lifestyle choices in people who are overweight or obese have positive effects on health and should but applauded, but do not eliminate these effects completely.

I’ve always wondered: what’s behind the belly button?: When a baby is born, the lifeline between the mother and child (the umbilical cord) is cut, and the shrivelled remains become the belly button on the outside. What happens inside?

Hay fever survival guide: why you have it and how to treat it: Opt for the newer, non-sedating varieties of antihistamines. The older drugs, which are still available, cause drowsiness and have been shown to contribute to workplace accidents in adults and impaired learning in children. Antihistamines in general are good for itching, sneezing and watering symptoms, but do not relieve nasal blockage very well. Decongestant tablets and sprays can do this job, but they are limited to relieving symptoms only and do not resolve the underlying inflammation. Overuse of decongestant nasal sprays can lead to longer-term problems with nasal blockage, so limit their use to a few days only.

For people with moderate to severe and persistent symptoms of hay fever, the most effective medications are the intranasal steroid sprays. The older ones are now over-the-counter items and others are available by prescription. These sprays have a “preventative” action and are most effective when use begins before the pollen season. If not, they will start relieving symptoms after a few days. The sprays must be used every day during the season to allow the best chance of success and to minimise side effects in the nose. They have also been shown to reduce allergic eye symptoms.

1 in 9 men have oral HPV, but we can fix this: We have a way to protect against HPV – a virus that affects more men in the US than previously thought – and associated cancers. Recent studies have indicated that 1 in 9 men in the US carry oral HPV – a virus that can cause cancers of the mouth and throat in addition to cervical, vaginal and anal cancer. While data on the ability of the HPV vaccine to protect against oral cancer is not yet available, the promising protective effects against cervical and vaginal HPV-related cancer may extend to other cancers related to HPV. Unfortunately, just over half of boys are receiving this vaccine and being unvaccinated increases the risk of cancer in the individual and the risk of passing on a cancer-causing virus to another person.

Cancer charity hires ‘fake news’ nurse to warn patients off bogus cures: So many people are getting bad advice online, that “Macmillan Cancer Support has hired a digital nurse specialist amid concern that patients are increasingly turning to websites promoting bogus cures and false information. Surveys … found that 42 per cent of those diagnosed with cancer looked up their disease online, with one in eight saying they did so because they did not understand what doctors had told them.”

Rudolf Virchow. I had heard the name before but had no idea how significant the man was to modern medical practice. He pioneered the field of cellular pathology, the concept that disease was based in cellular processes and not whole organs. This helped put to bed the badly outdated theory of the Four Humours, dating from ancient Greek times. He coined the terms “thrombus” and “embolus”, which are still in use today. And as if that weren’t enough, he displayed a keen interest in the fledgling field of anthropology, visited the Troy ruins with von Schliemann himself, and promoted public health while in office in the Berlin City Council, the Prussian Diet and the Reichstag. If ever there was a Renaissance man, it was Rudolf Virchow.