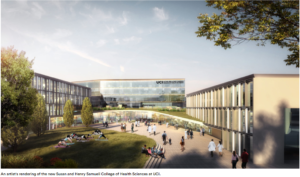 A $200 million gift promotes alternative therapies at a California medical school — and critics recoil: “The couple has been promoting and funding research into alternative medicine for years … [including] the efficacy of prayer and homeopathy as a way to protect soldiers from biological attack. [Critics] argue that it is a waste of time and money to study therapies that simply are not plausible, such as homeopathic pills, which are made from substances so heavily diluted that they’re basically water.”

Researcher takes aim at celebrity health fads, ‘massive wellness industry’: Celebrities and social media are major factors driving the wellness industry based on pseudoscience. They make impossible claims such as extreme cold to burn 800 calories. This does not address the real issues present in health care, especially for vulnerable populations.

If you feel better, should you stop taking your antibiotics? A recent paper suggests that patients would be better off stopping antibiotics when they feel better, instead of completing the entire amount prescribed. Could this approach reduce antibiotic overuse and the risk of widespread resistance?

Bottled water companies make dubious claims to justify price: CHOICE: “Zouki Breathe water, sold at a Sydney hospital, says it is infused with oxygen which provides health benefits like mental focus, endurance and recovery. But Choice found it contained the same amount of oxygen as tap water.” Aside from the fact that there’s no evidence to support those claims about oxygenated water anyway, why is pseudoscience being sold at a hospital?

‘Get to the doctor’: Warnings issued after flu kills eight-year-old Melbourne girl: Our deepest sympathies are with the family of this little girl. “Victoria’s deadly flu season has claimed the life of an eight-year-old girl and people have been warned not to dismiss symptoms as ‘simply a cold’. Health Minister Jill Hennessy on Monday said the Melbourne girl died on Friday, following the flu death of young dad Ben Ihlow on Father’s Day. Ms Hennessy says she will meet with experts on Monday to discuss the flu crisis and urged Victorians not to dismiss flu symptoms as ‘simply a cold’ or ‘man flu’. ‘Get to the doctor, call Nurse on Call, call an ambulance if you feel someone is very unwell. But don’t ignore the flu symptoms,’ Ms Hennessy said.”

History of blood transfusion: The Medical Use of Human-Human Blood Transfusions. When the first successful transfusions of human blood occurred in 1800s the risks were far greater than they currently are – it wouldn’t be until nearly 100 years later that the existence of blood-groups became known!

Amber teething necklaces: Amber waves of woo: Amber necklaces are popular among a certain section of parents who believe they reduce teething pain in babies. This relies on an implausible idea that succinic acid within amber penetrates the skin and acts as a pain reliever. As always, there is no solid evidence for this idea aside from anecdote. And these necklaces are a choking hazard due to potential strangulation.

Medical Advances in Nineteenth-Century America: Anaesthesia, a procedure we all take for granted today but it hasn’t actually been in use for very long. In the days before anaesthesia the most important skill for a surgeon was speed, particularly in reference to amputation. And so you would think doctors would have been quite eager to adopt the breakthrough that was anaesthesia with ether; but sadly, the natural reluctance to change that is human nature prevailed. Yet despite this reluctance, ether was eventually adopted as standard for surgical practice and it was this innovation that allowed modern surgery to beyond amputation and the removal superficial lesions.

Artificial intelligence won’t replace a doctor any time soon, but it can help with diagnosis: Diagnosis could be performed by artificial intelligence in future. “These systems are incredibly cheap to run … They have no waiting lists. They never get tired or sick or need to sleep.” This article takes a balanced approach to this sometimes over-hyped issue. Artificial intelligence can be trained to make decisions like a doctor with decades of experience – but it is more likely AI will be used as a tool by our doctors and nurses rather than replace them.

How the media oversold standing desks as a fix for inactivity at work: In our study, we also found more than one-third of articles incorrectly warned that too much sitting cancels out the benefits of exercise. This is contrary to recent research showing high levels of moderate intensity physical activity (about 60–75 min a day) seem to eliminate the increased risk of early death associated with high levels of sitting time (eight hours a day or more). This rigorous study, analysing data from one million adults, also found this high activity level reduces, but does not remove, the increased risk linked to high levels of TV-viewing.

The Dangers of ‘Home Remedies’ for Serious Illnesses: Many people turn to home remedies to treat their cancer, colds, and autoimmune disorders, but some of these can cause more harm than good.