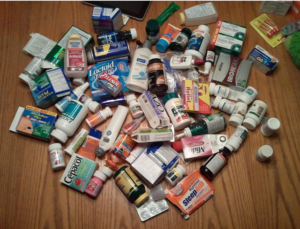 Are drug expiry dates really a myth?: “There’s no single rule for expired drugs and supplements, owing to the variety of products, regulatory requirements, and other factors that can influence a product’s safety and efficacy. In general, expiry dates are conservative, and consumers can have confidence that drug labeling claims will be accurate up to, and in some cases well beyond, the labelled expiry date. But the reality is that we don’t store drugs under ideal circumstances. So when absolute certainty is required, stick to drug products that are not expired. When absolutely necessary, expired drugs are probably safe, however, the potency may be compromised. And before you flush or toss those expired drugs, find ways to dispose of them in a way that minimizes the environmental impact and potential for harm.”

How “Provoked” Urine Metal Tests Are Used to Mislead Patients: Many patients are falsely told that their body has dangerously high levels of lead, mercury, or other heavy metals and should be “detoxified” to reduce these levels. This article explains how “provoked” urine tests are used for this purpose.

AHPRA lays charges for advertising: The Australian Health Practitioner Regulation Agency has for the first time charged a corporation rather than an individual for misleading advertising of regulated health services in several newspapers. More information is not available as this matter is before the courts, but we hope to provide more information on this case in due course.

International anti-vaxxers banned from Australia: The makers of controversial anti-vaccine film “Vaxxed: From Cover-Up to Catastrophe” Polly Tommey and Suzanne Humphries have been denied re-entry to Australia for a substantial period after staging several secret meetings nationwide in which parents were encouraged to expose children to deadly diseases. Visa breach issues have been cited as the reason behind the ban, as their activities represent a risk to the health, safety or good order of the Australian community.

Guys, don’t tape your penis shut instead of using a condom: “As far as medical products go “beta-testing” appears to be snake oil Parsel tongue for send-us-your-cash-we-have-done-no work-on-this-what-so-ever-but-it-seemed-like-a-good-idea-at-3 a.m. Ethical researchers do not release “beta” products they complete Phase 1 studies and then recruit for Phase 2 studies.”

Can’t Have A Pet? A Robot One Is The Next Best Thing: “The introduction of a robotic seal called “Paro” could bring positive benefits for people with dementia, including reduced anxiety and a decreased tendency to wander. Paro demonstrated some effectiveness in reducing agitated behaviour when compared to usual care, although the size of this difference was small,” says Professor Moyle. “Our analyses also suggested that there was an initial positive, novelty response to Paro and plush toy from residents. This short-term effect was strongest for visual engagement with the Paro and plush toy, and for pleasure.” She stresses that “a robotic animal such as Paro should not be used to replace staff time, but rather be used during those inevitable periods when staff are otherwise preoccupied or when the individual may benefit from comfort and stimulation.”

Look to Indonesia to see why we vaccinate our children: It’s a strange phenomenon that diseases essentially eliminated through a concerted vaccination program are now considered inconsequential by anti-vaccine advocates. Having never seen a child with measles, it is easy to imagine the disease doesn’t exist and that vaccination is yet one more plot by Big Pharma to make money. A visit to our neighbour Indonesia is all that is required to lay that myth to rest. In poorer countries where immunisation coverage is not good, these diseases are highly prevalent especially in children. Indonesians know the value of vaccination, it’s a shame our affluent society contains people who don’t and blythly spread their misinformation to the detriment of all Australians, and children in particular.

“Hair Analysis”: Many Alternative Medicine practicioners use hair analysis “as a road map to see what is happening in the body” As such they may use it to diagnose heavy metal toxicity or deficiencies. among other things. However “Hair analysis is worthless for assessing the body’s nutritional status or serving as a basis for dietary or supplement recommendations. Nor should it be routinely used to screen people for heavy metal toxicity. Should you encounter a practitioner who uses hair analysis for any of these purposes, run for the nearest exit and complain”

Bottleshops affect people’s health, so our laws need to reflect that: “The 20% of Australians who live in the poorest areas are 1.6 times as likely as the richest 20% to have two or more chronic health conditions like heart disease and diabetes. Yet bottleshops are disproportionately located in areas of socioeconomic disadvantage, potentially adding to the disease burden of an already disadvantaged area. Local communities with higher densities of alcohol outlets tend to have poorer health, with much higher rates of hospitalisations and premature deaths, particularly due to cirrhosis (long-term liver damage). The link is stronger in poorer communities.

The clustering of outlets can also encourage outlets to compete on price and promotions for cheaper and greater quantities of alcohol. Such promotions can lead to anti-social behaviour such as alcohol-related injury and violence. Researchers see this in both rich and poor areas. There are also different effects depending on how the alcohol is sold. For example, a high density of alcohol outlets (which includes large and small bottleshops, clubs and pubs) is strongly related to alcohol-related chronic disease. Meanwhile increases in the number of licenses for bottleshops are associated with increases in rates of domestic violence. We see this across the board, not just in poorer areas.”